CAOS ROCK CLUB  – Venerdì 7 marzo – WHITE SKULL: Sharp voice, screaming guitars, hammering rhythms, a stunning mixture of power and melody: the result is a high incendiary gradation sound, coming from the heart of five musicians! All this is White Skull!!! 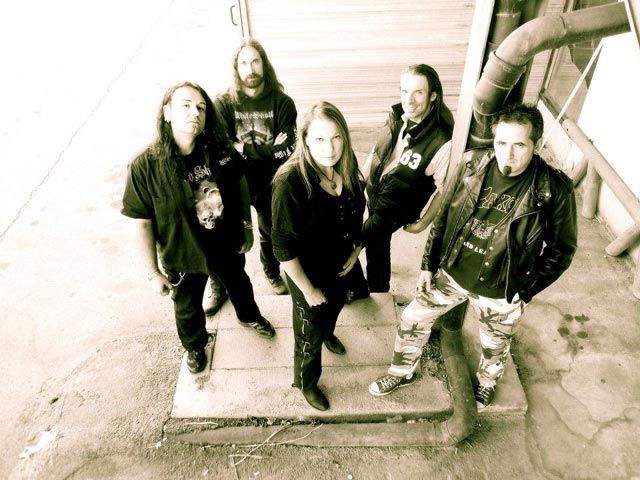 WHITE SKULL: Sharp voice, screaming guitars, hammering rhythms, a stunning mixture of power and melody: the result is a high incendiary gradation sound, coming from the heart of five musicians! All this is White Skull!!!
In 1991, after the recording of their first demo-tape, the band was noticed by the audience and the specialized Italian metal press. In May 1994, the band released their second demo entitled “Save the Planet”, which received excellent reviews. White Skull also contributed to two Heavy Metal compilation: “Nightpieces 4” (January ’95) and “Area Sismica” (June ’95).
Finally, a few months later, the Italian indie Underground Symphony gave them the chance to record their debut cd entitled: “I Won’t Burn Alone”. The album received a lot of positive responses from the press and local audiences and White Skull started to play in pubs, local festivals and biker meetings.
The excellent results pushed the band to write down immediately new songs. Those caught again the interest of Underground Symphony which released in March 1997 the new album titled “Embittered”. The “Embittered Tour” started soon after the distribution of the album and kept the band busy until 1998. The guys played also with the likes of Overkill, at the Italian “Gods Of Metal” festival and in Berlin with UDO and DORO.
In the meantime the band kept rehearsing and writing new songs which ultimately brought to the release of the EP “Asgard” and the cd “Tales from the North”, a concept album about the myths of the North (Vikings and Nibelungs) with CHRIS BOLTENDAHL, singer of GRAVE DIGGER, as special guest. The album was released in 1999 by Nuclear Blast worldwide. White Skull then played in support of Grave Digger in the “Excalibur Millenium 2000 Tour” in Germany and Switzerland and in March 2000 in Italy.
The following album “Public Glory, Secret Agony” was released in August 2000 on Breaker Records (Udo Dirkschneider’s record company), with worldwide distribution by Nuclear Blast.
The first line up change happened in February 2001 when original singer Federica “Sister” De Boni left the band due to personal problems. She was replaced with the male voice of Gustavo Gabarrò “Gus”, a metal singer from Argentina.
Finally the band came back into the studio at the end of 2001 in order to produce another concept album entitled “The Dark Age” based on the Middle Age and on the crimes of the Inquisition. The album was released by Frontiers Records in August 2002. After the good critical and public acclaims who followed the release of “The Dark Age” the band played a lot of shows and festivals in Europe (Blind Guardian Open Air, Metal Dayz, Badia Rock Festival, Tradate Iron Festival, Valpolicella Metal Festival and so on…). Two line-up changes brought fresh new air in the Band, axeman Danilo Bar and bassist Steve Balocco joined White Skull in different times during 2003 and 2004. Notwithstanding the band line-up change, White Skull released in May 2004 the sixth full length titled “The XIII Skull” for Frontiers Records.
After the album release the band had cancelled a lot of shows due to health problem of a band member. During this stop the band wrote a lot of new songs and they came back into the studio at the end of 2005 to record a concept album entitled “The Ring of the Ancients” based on the Celtic’s stories. This cd arose the interest of Dragonheart Records which signed the band to a multi-album deal. In October 2006 Dragonheart/Spv published “The Ring of the Ancients”. After the album release, the singer Gus Gabarro’ left the band due to personal reasons. The Skulls decided to go back to their roots, looking for a new female singer. The new vocalist is Elisa “Over” De Palma, a strong and powerful singer, who is excited and proud to sing in White Skull and brings.
The band started to play live shows to promote the new album and to introduce two other new members: Alessio Lucatti (Keyboards) and Jo Raddi (Bass). During the tour, the group started to compose new songs for the album “Forever Fight”, a real comeback to the original sound of White Skull, which will be out on March 2009 on Dragonheart/Spv. While on tour, on July 2010, Elisa De Palma leaves the band due to personal differences.
December 2010: Federica Sister De Boni joins the Skulls and starts right on to work on the new songs and shows. The new album titled “Under This Flag” is in perfect line with the music proposed by White Skull, is more heavy than ever and will go straight to the hearts and souls of Metal Bangers. Many shows have already been scheduled in support of the new album and the Skulls are ready to kick ass!
See ya’ on the road!