Lunedì 15 luglio 2013 ore 22 –  Torche is an American band from Miami, Florida, whose sound is often described as stoner metal, or sludge metal. … 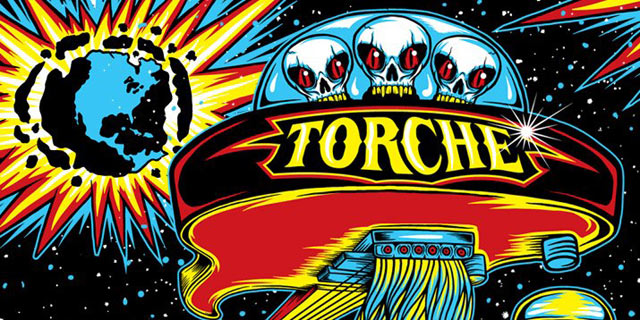 Torche is an American band from Miami, Florida, whose sound is often described as stoner metal, or sludge metal. They formed in 2004 and have released three full-length studio albums, four EPs, two split albums, and three singles. Their most recent release was Harmonicraft, released in 2012.
The group was formed in 2004 by Steve Brooks (ex-Floor), Juan Montoya (ex-Floor, ex-Cavity, ex-Ed Matus Struggle), Jonathan Nuñez and Rick Smith (who also played in the grindcore bands Shitstorm, Tyranny of Shaw, Adore Miridia, and the screamo band Tunes for Bears to Dance To). According to MTracks.com: “Their music has a unique, hard-hitting sound that provokes a wide range of emotions, and they have a large fan base throughout the world.” They have toured with Mogwai, Isis, Pelican, Black Cobra, Baroness, Jesu, The Sword, Coheed and Cambria, Stinking Lizaveta, Harvey Milk, Boris, and High on Fire. Steve Brooks, however, has said that they don’t consider themselves a metal band