Baraccano – Casa delle Associazioni – Venerdì 8 Marzo – Vincent Moon is known for traveling around the globe with a camera in his backpack, documenting local folklores, sacred music and religious rituals, for his label Collection Petites Planètes. He… 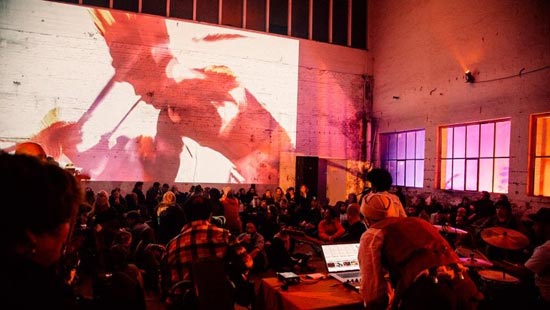 Vincent Moon is known for traveling around the globe with a camera in his backpack, documenting local folklores, sacred music and religious rituals, for his label Collection Petites Planètes. He works alone or with people he finds on the road, and most of the time without money involved in the projects. He shares much of his work, films and music recordings, for free on internet, under Creative Commons license. In 2009 his documentary on artist Kazuki Tomokawa, La Faute Des Fleurs, won the Sound & Vision Award at the Copenhagen International Documentary Festival, and his film Esperando el Tsunami was nominated for the same award in 2011.

Uruk (Massimo Pupillo/Zu + Thighpaul Sandra/Coil)
Thighpaulsandra has an impressive track record particularly playing on many Coil albums. Traces of this influence can be found in the keyboards used on Mysterium Coniunctionis. We could randomly pick such masterpieces as the two volumes of Musick to Play in the Dark and Astral Disaster, records that were and still are among the best ambient albums ever made. He has also made several records in his own name (including the unpredictable Double Vulgar) and was a member of the UUUU (Mego Editions) project in 2017 which also featured a particularly creative Graham Lewis (Wire).

Massimo Pupillo is well known for having slammed a lot of ears as the bassist with the highly imposing Italian jazzcore trio Zu (those who saw them on stage will understand). 2009’s Carboniferous or the more recent 2014 collaboration with Eugene Robinson (Oxbow) still resonate for a lot of listeners. In 2016, Massimo was in Triple Sun (no doubt a reference to the splendid song by Coil, again..) alongside two well-known musicians at Ici d’ailleurs – Raphaël Séguinier and David Chalmin (The Third Eye Foundation).