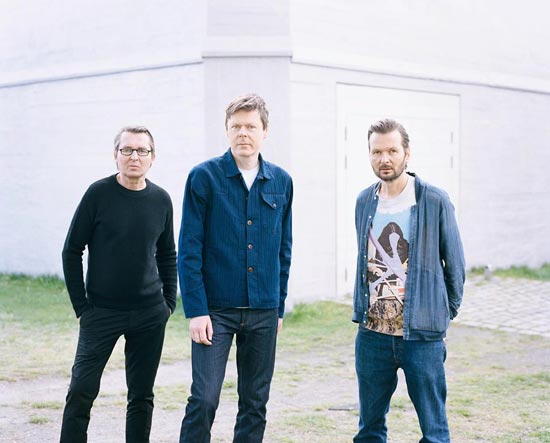 Biografia:
Walking a line between what has passed and what is yet to come, seminal trio To Rococo Rot have carved an identifiable niche for themselves, and one which has crossed a variety of styles; neither wholly in the realms of ambient or pure electronics. The late 1990s albums of Veiculo and The Amateur View brought their fundamental and innovative landscapes of sound to the fore, whilst 2001’s collaboration with I-Sound, Music is a Hungry Ghost, showed their ability to blend disparate influences into something wonderfully cohesive. Remixed by Four Tet and Daniel Miller and heralded by the likes of Modeselektor, their influence extends as far as their unique approach deserves.

Returning to Berlin-based label City Slang in 2014 for their first full-length since 2010’s Speculation (released on Domino) and their eighth album in total, Instrument is a landmark record for the group. The serenely soft melodies of No Wave pioneer Arto Lindsay adorn three tracks (‘Many Descriptions’, ‘Classify’ and ‘The Longest Escalator in the World’), offering up a new perspective. As much a progression as a refresher course for older material, it is arguably their most refined record so far.

The music of brothers Robert and Ronald Lippok and Stefan Schneider has always existed in its own world. Schneider’s prominent and melodic bass lines sit between drums, guitar, synths and peripheral electronics from the Lippok brothers. The amount of depth is vast; the invitation is nevertheless there to explore the complex levels beyond the basic instrumental foundations, or to simply let the tide of sound wash over and envelope you.

There is a degree of open-endedness in the album’s title. Instrument is not only referred to in its musical sense but also conceptually. “We don’t see the title as only a musical instrument but instrument as a tool to work on your creation as an expansion of yourself.” Says Robert Lippok. “Instrument is also something between you and the gegenstand, the thing you interact with.”

After eight records without a bona fide, original To Rococo Rot ‘song’, the band have made their first forays into non-instrumental music. The question of “why now?” is a pertinent one. Lippok explains that it was as much down to happenstance as anything else. “I don’t know how it came but it came quite naturally. A lot of our music people say is longing for vocals,” he says. “We never felt like that but when we were in the rehearsal room and played the stuff we could hear these voices. Maybe because there were about 40 old pianos and when we played, all the strings of the pianos resonated. That made us feel that there should be a new and another element in this music. There was no discussion about it.”

The decision to recruit Lindsay was both swift and natural. He was there the first time the trio played New York, and admired what Lippok calls the “unique handmade minimalism” they were practising in those days. More recently Lindsay wrote a lengthy feature in Germany’s Electronic Beats about the City Slang re-issues of Veiculo, The Amateur View and Music is a Hungry Ghost. In it he states admiration for their “non-musician’s” way of making music, in particular the way a simple idea is manipulated to a variety of ends. Once the band read the article, the decision to ask Lindsay was inevitable. “We thought this is a sign from god or somewhere. He was totally into the idea from the first second on,” Lippok says. The admiration and respect cuts both ways. “I really like the combination of the way he plays the guitar and the beauty of his voice. It’s magic how these two worlds come together,” says Lippok.

The end result exceeded expectations “absolutely”. His way of both composing and singing melodies, all created from scratch in the studio, was especially impressive, Lippok says: “They are so unique and fit so well with the sound structure that we build.” The shared experimental philosophy of Lindsay and To Rococo Rot is what makes Instrument such a fascinating and exciting prospect. The American’s vocal decorations add new colour to the varied textures and sketches in which they feature.

Lindsay’s laid-back and unhurried words lend themselves perfectly to the aesthetic of To Rococo Rot whilst pulling them through to an unfamiliar and occasionally pop-based space. Though melodies have always been a big part of their sound, the inclusion of a human voice is a distinctive modification. It sits perfectly within the warm timbres created by Lippok, Lippok and Schneider.

The pulsing ‘Many Descriptions’ is a bold opening statement; with Lindsay’s breezy vocals the focal point. Its position in being the opener was a must, Lippok says. “We wanted to make clear that something is different.” The difference this time round is not just noticeable, but also profound. Yet, Instrument is still unmistakably To Rococo Rot; with recognisable complex landscapes of sound and structure that they have practised and made their own.

The appeal of To Rococo Rot lies not only in their music but also their ethos, from the writing process to the finished record. An often rudimentary and uncomplicated approach is reflected in their overall world view. “We’ve been nomads through all these years – we’ve never had a studio, we’ve never had a rehearsal space, we hardly own instruments…just the basic stuff. Stefan lives in Dusseldorf, so we don’t see each other very often. This maybe keeps things fresh and exciting.”

Arto Lindsay is more than just a vocalist and what he brings to the record is manifold. His melodic appearances have the potential to bring about a reassessment of what To Rococo Rot are capable of, as well as enabling a fresh perspective on their music. A new figure in the creative process yielded invaluable insight.

“When we work with other people we try to stay focused. Whenever you play your music to somebody new, your view on the music changes. We have never opened up our material so widely to somebody.” Lindsay’s skill as a producer came to the fore. His input and presence was something new and created a “different drive” to their other releases. Aside from the striking nature of the crystal-clear and laid-back vocals, Instrument is incredibly refined throughout its ten tracks. This is partly due to the economical and efficient working manner in which ultimately-unused material was discarded early on and the remainder became the sole focus. “We were just looking for a very clear, focused sound out of only a few elements,” Lippok says.

‘Down in the Traffic’ shows a classic yet refreshed sound as a bass line is locked in, its groove continuing for the best part of five minutes, whilst electronics puncture the foreground and retreat to the background. Lindsay appears again on the languid ‘Classify’, offering up soothing and rhythmic proclamations in the verse and an effortlessly-sung chorus, all among Schneider’s crawling bass chords and Ronald Lippok’s mellow drumming; itself a hugely prominent aspect of the record.

‘Spreading The Strings Out’ begins the more unconventional and electronic-based latter half, a contrast from the earlier pieces which recollect some of the acoustic building blocks of Speculation. A disjointed and robotic piano riff plays the lead role as the texture around it gradually deepens and thickens. Lindsay gives his unconventional guitar tones to the minute-and-a-half of ‘Sunrise’; a metallic and futuristic sounding collection of noises, redolent of some of the unusual textural experimentalism of early releases.

Instrument may be a To Rococo Rot record unlike any other – and one which treads unfamiliar ground, especially on the digital pulse of tracks like ‘Pro Model’ – but it also represents a return to the beginning. “I think maybe we’ve come in a way back to where we started. We’ve been through a lot of experimenting, buying new gear, trying this and that with electronic and non-electronic stuff,” says Lippok. Yet Instrument is by no means a regression; the process this time has merely been a vehicle for To Rococo Rot to reaffirm and even advance their relevance and status as one of electronic music’s great innovators.