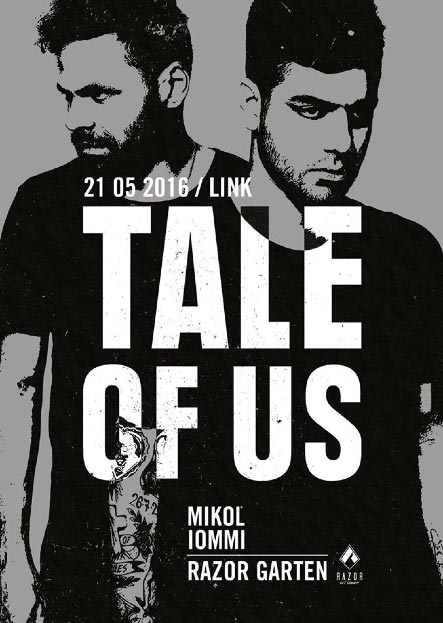 TALE OF US
Tale of Us are Berlin-based DJ and production partnership Karm and Matteo who are currently re-writing the rulebook for deeply moving, emotional electronic music. Together they share a sonic vision that pulls together elements of house and techno with influences from pop, nu-disco and even rock music. While all of their productions are instantly recognizable as Tale Of Us, these range from straight-up dance floor jams to low-slung ambient tracks and more abstract compositions. While both originally hail from North America, Karm was born in Toronto and Matteo in New York, they moved to Italy as children, which is where they met and formed the close working bond that they now share.

MIKOL
A young woman born and raised in Palermo , started out as a project that came from her passion for house music , since she was very young she has been a music lover.
Fascinated by the techno underground scene she took part in big music festivals around the world , driven by her curiosity to learn and put her very own style of music together.
Thanks to her passionate personality typical of southern Italy and with her creativity , she decided to make arrange perform and mix music tracks approaching its way to the world of production , so she creates her dynamic music style with a fluid mix of tech-house and techno sounds in a very unique way.
The feelings she has while mixing are so powerful that sharing them with her listeners completes her.
2015 She has played with Dave Clarke known as The Baron of Techno , Tommy four seven , Truss , Fatima Hajji at Rome
2015 she has played with Summerland Festival with Ralf , Ryan Crosson , Steve Bug
2016 she has played at Amore Festival

What started out as a game became essential for her life.