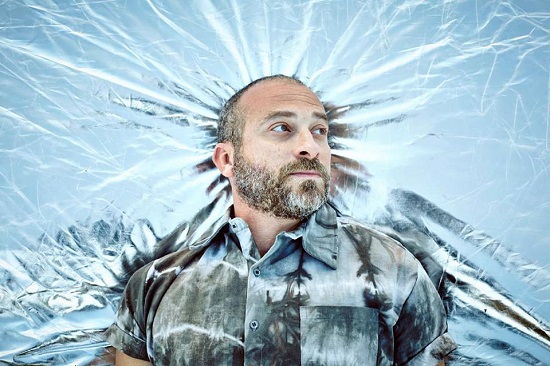 Head past the lascivity, raw power and spectacle of baile funk and tecnobrega, and the ever-present samba grooves and you will find a mini-revolution is happening in Brazil. Pop music is being crafted with melody, wit and invention. More than that, it’s being repositioned, the influence of Western pop and rock being replaced by the pulse of Africa and rhythms snatched from Latin America’s new post-dictatorial identity. At the heart of it all is Lucas Santtana.

In September 2014 the French label No Format will release Sobre Noites e Dias, his sixth album and third to be released outside of Brazil. Working with a variety of collaborators, the Bahian-born singer’s latest continues where his last record, The God Who Devastates Also Cures, left off. Once again he combines the acoustic with the electronic, switching between reflection and something more visceral, the hustle of the city followed by the countryside’s gentle whisper. It’s this passing of time, of emotions through the day, that is referenced in the title, Sobre Noites e Dias translating as “during the days and nights”.

Recorded in Brazil as well as Paris, the new album features collaborations with French actress Fanny Ardent on the hypnotic “Human Time” and French rapper Féfé on the African-infused “Diary of a Bike”; with members of São Paulo’s afro-punks Metá-Metá embellishing many of the tracks; and another French ally, renowned cellist Vincent Segal, on the contemplative “Blind Date”. Rio’s tecnobrega innovator Omulu and the German DJ and producer Daniel Haaksman provide their assistance on one of the album’s stand-outs, “Funk dos Bromanticos”. It’s a track which screams of a new found sense of freedom in Brazil, Santtana making reference to the same-sex couples who attend his shows and of the same-sex ‘friends’ who are not afraid of showing their love for each other, the ‘bromances’ of the title, in a string-drenched fusion of pop, dubstep and baile funk. It’s the perfect example of Santtana’s polycultural method of making music.

Sobre Noites e Dias started life on the road, Santtana working closely with his live band of Bruno Buarque and Caetano Malta to create the base for this album: loops of guitars, beats and digital instrumentation that ensure this is the most electronic album of Santtana’s career. The comparisons to Four Tet and Thom Yorke have never seemed so apt; the latter’s solo work particularly coming to mind on “Montanha Russa Sentimental”, a tense electronically-charged meditation on life, love and the “sentimental rollercoaster” of the title.

When stripped down to acoustic guitar, as on the glorious album closer “Velhinho” it’s Devendra Banhart and Sebastien Tellier that come to mind, while on diversions into bouncing electro-pop there are echoes of Beck and Metronomy at their rhythmic best. In fact, it’s only on the carnival march of “Mariazinha Morena Clara” and the finger-clicking bossa swing of “Partículas De Amor” that we get a hint of Santtana’s origins.

Sobre Noites e Dias is an album in which Santtana adds a Brazilian accent, but which drinks from the same sources as his peers (Beck, Banhart, Yorke, etc.), creating global music that unites pop with invention, that’s electronic but full of soul, and that’s ‘world music’ only in an ideological sense. Until the music industry changes their categorisation system, Santtana’s “polycultural pop” is destined to confuse record store owners but thrill the public.

After playing flute in various orchestras in the Brazilian state of Bahia, Santtana made his recording debut in 1993, performing on Caetano Veloso and Gilberto Gil’s Tropicalia 2 album. He would continue working as a flautist with Gil and on a variety of sessions throughout the 90s. However, at the same time, he was learning to play the guitar and writing his own songs in downtime while touring. These songs started to see the light of day through collaborations with Arto Lindsay, Marisa Monte and Daniela Mercury until he released his first solo album, Eletro Ben Dodô, in 2000. It was the start of a cycle of albums that focused on different sounds and textures. That debut was percussive; his second, Parada de Lucas (2003), was electronic, inspired by the nascent baile funk; the third, 3 Sessions In A Greenhouse (2007), was heavily influenced by dub; Sem Nostalgia (2011) was a response to bossa nova, inventively crafting new sounds from just guitar and vocals. His fifth, The God Who Devastates Also Cures (2012), suggested the start of a new cycle, a synergy of everything that has gone before, and which has continued with Sobre Noites E Dias (2014).

Estère is a girl with an MPC she calls Lola. She produces all her own songs with Lola, mostly at home in her pyjamas.
Estère plays/records a mixture of bass, synth, drums,
guitar,vocal harmonies, keyboard, whistles, claps, kazoo, desk tapping and anything else that might take her fancy then layers her production with pulsating rhythms and evocative melodies that adhere to the genre of Electric Blue Witch hop.
Since obtaining Lola in March 2012, Estère has played a large variety of live performances in cities and festivals through-out New Zealand, Australia, South Korea and Europe. These include Jeonju International Sori Festival,
Ulsan World Music Festival, Aarhus International Music Festival and Melbourne Let Them Eat Cake.
Over the last year Estère has also opened for a variety of international artists, including Erykah Badu, Morcheeba, Baths, Ikonika and KT Tunstall.
In April 2014 Estère released her debut self produced album via band camp.
Most of Estère’s songs, including Culture Clash, Cruel
Charlie, I Spy, Thoughts, Patchwork Solider, Reptilian
Journey and Flash Light(feat Oddisee) have received
extensive radio play on stations through-out New Zealand and have featured on various international blogs including Afro Punk, Disco Naiveté and Portals.