MIKASA – sabato 22 aprile 2017 – Geometric Vision take form in 2012 in Naples. Ago Giordano, after several electro-darkwave music experiments decided to create a real band with Gennaro Campanile on bass and Roberto Amato on guitar. … 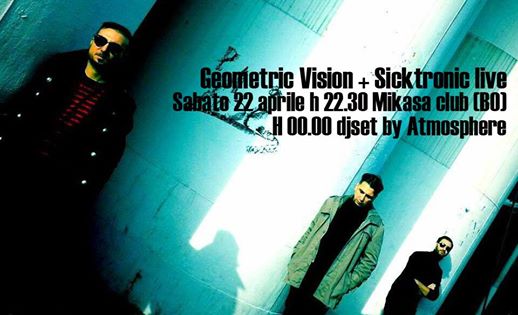 Geometric Vision take form in 2012 in Naples.
Ago Giordano, after several electro-darkwave music experiments decided to create a real band with Gennaro Campanile on bass and Roberto Amato on guitar.
In 2013 the band gave birth to the first album entitled “Dream” coming out for the Italian-Swiss label Swiss Dark Nights.
Characterized by a strong coldwave matrix (sometimes darker, sometimes more ethereal) influenced by the 80’s music but revisited in a modern key.
The album was well received by critics in both Italy and abroad so it was played live around Italy during a long tour.
In the beginning of 2015 there was the release of the second album “Virtual Analog Tears” always with the label SDN in collaboration with Manic Depression.
The new album was anticipated by the single “Hills”.
The new work, even though it has some similarities with the previous one, is in some ways darker and more acid with shoegaze, ethnic and industrial influences and this shows clearly the new sound research pursued by the band.
V.A.T. seems to have a common thread, the relationship between truth and artifice in the contemporary era and the disorientation that this generate.
The second album allowed the band to cross the national borders and Virtual Analog Tour reached some of the most important European cities and festivals.

Sicktronic is an electro/industrial duo formed by Vincent M. Edgart and Lorenzo Setti. The project started in London, UK, in 2006 and it took the current form in 2013 when Vincent moved to Modena, Italy.
Sicktronic released an LP called Spiders in 2012 and an EP called “Darkage” in 2016. Both albums mix different genres like electro, dark, industrial and rock.
The extensive use of analogue synths, samples, heavy guitars and the screamed lyrics create an intricate dystopian sound that shakes and unsettle the listener, leaving a sense of fear and horror, but nonetheless cathartic.
The live show is futuristic and fierce, not a safe journey, not to be missed.
Fine della conversazione in chat