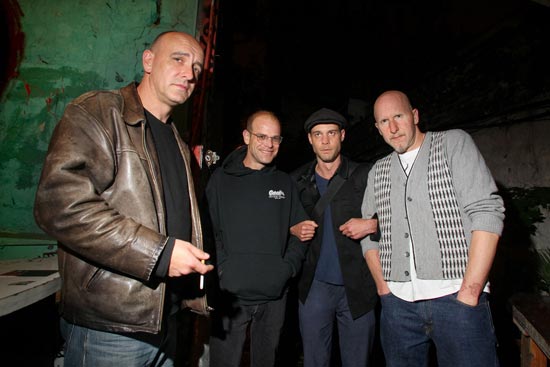 Enablers are a post-punk band from San Francisco, California which features the poetry/spoken word of Pete Simonelli. In addition to Simonelli, a published poet and writer who was working as a courier in the band’s early years, the band’s original lineup included Joe Goldring (guitar, formerly of Swans and Toiling Midgets and Touched by a Janitor), Kevin Thomson (guitar, Timco, Nice Strong Arm, Morning Champ, and [also concurrent with Enablers] Touched by a Janitor), and Yuma Joe Byrnes (drums, ex-Tarnation/Broken Horse, Touched by a Janitor). Enablers’ first release the album End Note, released on Neurot Recordings in 2004. In 2006 they released the Output Negative Space album, described by PopMatters as having “a swagger that seems almost malevolent”, and a split single with Redpanda. In 2007 they released the single-sided one track twelve-inch single “The Achievement”. In 2008 they released the Tundra album, a shared release between Lancashire and Somerset, Majic Wallet, and Exile on Mainstream. The band’s latest album is Blown Realms And Stalled Explosions, released in 2011. Doug Scharin, formerly of Codeine, HiM, June of 44, Rex, and Mice Parade, is now the band’s drummer.