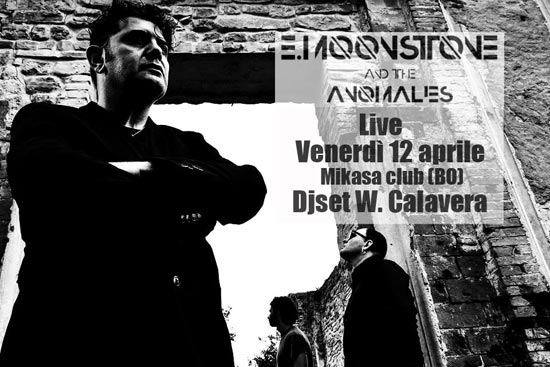 Emil Moonstone is an Italian singer and composer.

In 1992 he formed the “South Breed Out” band noise of which he is the leader and the voice. He had been previously part of the punk band, always as the founder, (Burp, Nevrotic Heads, DDT, Flying chips).

After a period of not many years as the voice of the “Pastonudo” new wave band, he forms the “South Breed Out”.

After years of inactivity decides his return on the scene, and with the inevitable other soul of “Two Moons” (but also the previously mentioned groups, except the “Pastonudo”) Joshep Rips Asanda (Two Moons, European Ghost) he forms the Two Moons, band with which is still in full activity with 1 EP and 3 albums.

Two Moons is a musical project founded in 2009. Two souls in a band: the dark, introspective linked to the typical sounds of the wave and the magnetic, shamanic and solar of modern electronics. The Two Moons propose acidic and visionary atmospheres, a representation of a fragile post-industrial poetry, an imperious pop-psychedelic without overbearing individualisms.

Emil Moonstone will be shortly undertaking what he calls “a solo parenthesis” with an album entirely written and played by himself, a proposal and a search for different sounds from the previous. A one man show project, which expresses almost 30 years of music in different bands, this time for better or for worse not contaminated by other components or collaborations.

The album’s release date has not been decided and made official yet.
Evento a cura di Atmosphere Bologna e Mikasa